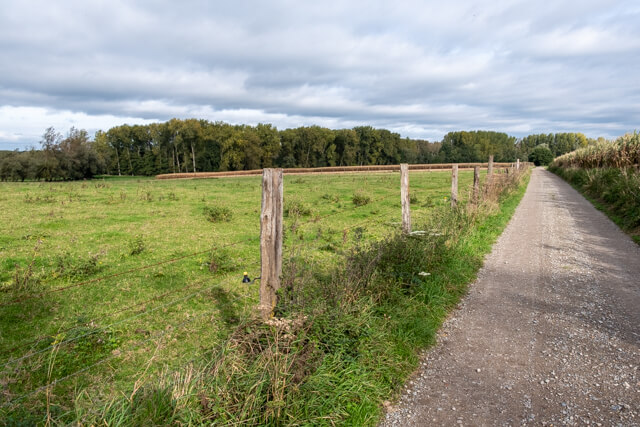 The Faluintjes is a nature reserve in the Brabant Kouters and is sometimes called the green lung of Aalst. The Abbey of Affligem has played a decisive role in the development of the region. For example, it was the monks who made the idea of extracting sand-lime bricks and having hop fields constructed.

They try to breathe new life into hop cultivation at this location. In a long past, hops cultivation provided a lot of employment and the Faluintjes region was known as the hop barn of Europe. Hop cones are the fruits of the hop plant. It is the yellow powder in the hop, called lupulin, that is used in the beer brewing process. This causes the bitterness in the beer, a nice head and a natural preservative.
No extra information.

The abbey is located in Hekelgem and you cannot see much more than the outer walls of the abbey. The history of the abbey began around 1062, when it was founded after preaching by a monk from St Peter's Abbey in Ghent. Over the centuries, the abbey was destroyed several times, but each time rebuilt. The abbey cannot be visited individually and the beer with the same name is no longer brewed here. Taverne Gasthof d'Oude Brouwerij is located in the building of the former dairy of the Affligem abbey.
No extra information.

The Kravaal forest, together with the Zoniën Forest and the Haller forest, belonged to the Kool forest in a bygone era. Kravaal refers to carvaal. Car stands for stone, vaal is a valley. In the 12th century people started quarrying in this region and a large part of the forest is in private hands. The Molenbeek originates in this forest
No extra information.

The Faluintjes is a nature reserve on the border of East Flanders and Flemish Brabant and is sometimes called the green lung of Aalst. Baardegem, Herdersem, Meldert and Moorsel are four municipalities that together form the Faluintjes region. The Abbey of Affligem has played a decisive role in the development of the region. For example, it was the monks who made the idea of extracting sand-lime bricks and having hop fields constructed. The excavated sand-lime brick was exported to all corners of the world via the Dender. The Cologne Cathedral, the Amies Cathedral and the Cathedral of Our Lady of Antwerp contain sand-lime from the Faluintjes. The name 'Faluintjes' is explained in different ways. According to some, it is a corruption of the French "vallée", referring to the Molenbeek valley. Others recognize the French "fallourdes", which means branch forests. Have the monks made this swampy valley accessible through stacked woodlands? Or is it rather a corruption of the Celtic "fallæn", the French "fallun" - "fallunière" or quarry in Dutch? There is indeed an impenetrable layer of sand-lime brick here. The Faluintjes thus far remain a linguistic mystery.
No extra information
Accessibility & HRC