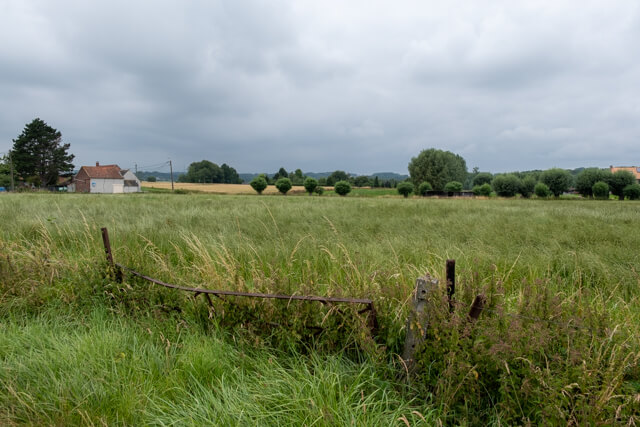 Until the Middle Ages, the Steenberg forest was part of a large forest belt in the region. The forest, today a valuable nature reserve with various valleys, descends a 30 meter deep slope and extends over a dozen hectares. In the meadows on the outskirts, cattle help with nature conservation in the summer. On the route there are many chapels and crosses that adorn the landscape. The views on this route are truly breathtaking.

The route goes from the starting point in the direction of the Steenberg forest. After that follows a part on paved roads and you come to a cross that is flanked by two linden trees. The views are breathtaking. After a short climb it continues in the direction of the nature reserve De Kollebroeken. You reach Everbeek-Benenden via the Terkleppebeek. You leave the village and walk along fields to the remains of a chapel from the time of Napoleon. Via the Tiep-Tiap path you walk through a beautiful valley back to Everbeek-Boven.

In the summer you walk past KN96 through a corn field

The Everbeek forests consist of the Hayes forest, the Trimpont forest, the Steenberg forest and Keelenberg. They are old forests, characterized by a lush spring flora with wild hyacinth and wood anemone carpets. The relief is erratic. There are numerous sources and winding source streams. Majestic beeches in particular dominate the view, but summer oaks, hornbeams and poplars also play an important role. In the valleys we find ash and black alder. On the valley flank of the Terkleppebeek, which originates in the Trimpontbos, there are a few smaller but valuable bushes. Together with the larger forest cores, they are the remains of the vast Poodsberg forest, which stretched between Ronse and Everbeek until the early Middle Ages. The Everbeek landscape looks varied and surprises again and again. The forests are bathed in a small-scale landscape with meadows, fields and grassy valleys, numerous rows of trees, winding and sometimes hollow roads. No wonder that so many plant and animal species still survive here that are strongly declining elsewhere in Flanders or have already disappeared. Typical animals for the region include forest birds such as tawny owl, wasp thief, hawk, woodcock and various species of woodpeckers. The deer has recently returned to the area. Less conspicuous, but equally present, are the acorn mouse and the squirrel. Especially the beautiful spring streams house a surprising fauna. Two rare fish species still occur here: the brook prick and the river bullhead. The streams are also the home of other typical and rare species in Flanders such as the water shrew, the fire salamander and the dragonfly.
Natuurpunt
2800 Mechelen Coxiestraat 11.
Website: www.natuurpunt.be

At the start of a field road along the Priemstraat and on the corner of a field plot, two linden trees flank a cross. They are candlestick summer linden trees, beautifully situated on top of a kouter. Visible from afar they are a beacon in the landscape.
No extra information.

The name of the Pijks Chapel comes from the French, chapelle de la paix. It was erected in 1815 by 3 soldiers from as a thank you for surviving the campaign to Russia with Napoleon. It has completely disappeared, only the floor has been recovered. These boys each planted a yew tree at their chapel. Two of them have disappeared, one is still there as a silent witness of the past 200 years. On the site, a work of art in Cortenstaal, designed by Peter Jacquemyn, was erected with the story of Everbekenaren in the forced service of Napoleon.
No extra information.

Tiep-Tiap is the name of a hiking trail and hill. The slope goes up to Lobe and is also called Lobe. A little more to the northeast the Fayte climbs the same ridge, but from the north.
No extra information.
Accessibility & HRC