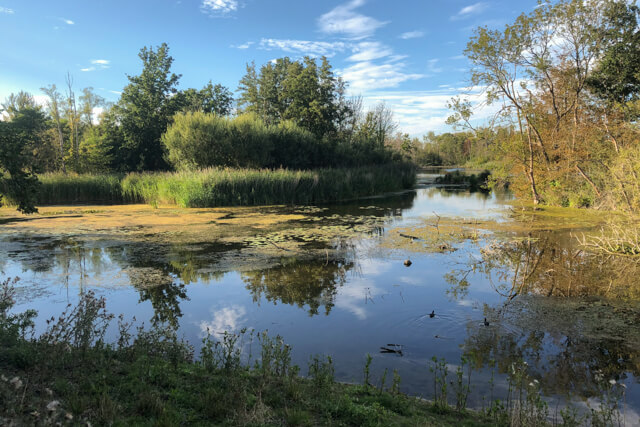 In the southern part of the polders of Kruibeke you walk successively through alder forests, Scheldt marshes and meadows. You may be spotting a beaver or a deer on your way!

From the Mercator square you walk in the direction of the Graventoren and then a short while over the Ring dike. Through alder forests you arrive at the Rupelmond Creek. Along the way you come across the Karper House and at the Coninckshofke you get a nice view of the creek. Then it continues over the Ring dike to enter the forest again a little bit later. At an old Lime tree you will arrive at the Lange Gaanweg which leads to the ferry Basel-Hemiksem. Turn off before the ferry and walk along the marsh on an unpaved road to the Scheldt dike. A beautiful meadow area opens to the right and the Scheldt flows on your left hand side, which you get to see very little. You follow the dike and just before Rupelmonde you catch a glimpse of the estuary of the Rupel in the Scheldt. The dike changes into a paved path and you come back to Rupelmonde. Here you deviate from the official route and arrive at the Scheldekaai and the Tide mill. From the mill it goes back to the starting point.

In the twelfth century, the counts of Flanders in Rupelmonde built a colossal moated castle in defense of the Scheldt and the Rupel, which also served as a prison. In 1554 Mercator lived there for seven months on bread and water after being accused of heresy. Over the centuries, the fortress was destroyed and rebuilt several times. After the war with France in 1678, the building finally went down. The still usable building materials were recovered by the local population, including for the construction of the Onze-Lieve-Vrouwe church. In 1817, a brick hunting pavilion with watchtower was built on the original tower base, known today as the Graventoren. In 1955, Lode Baekelmans and poet Bert Peleman set up a Scheldt and Mercator museum there, which can still be visited today. In the underpass - watch out for wet feet - you pay a visit to Mercator in his cell.
No extra information.

On the edge of the Rupelmond creek adorns the Carp House, one of the few structures that survived the adaptation works in the polders. The Carp house was built from recycled materials. This makes it appear older than it actually is. The building dates from 1961.
No extra information.

The Rupelmond Creek was created after a dike breach in 1715. The polders flooded and the breach in the dike was closed after three years. Today the creek is almost 10 hectares. The creek was also given a new look during the adaptation works as part of the Scalluvia project. The banks were sloped and exotic species were removed. After all, the riparian zones are important as a habitat and breeding area for many fish and bird species. The beaver also feels at home again today. The Scheldt marshes were always a natural biotope for beavers until they were wiped out in the mid-nineteenth century.
No extra information.

This nineteenth century hunting pavilion was owned by the bankers family Waterschoot, who used it as a country residence during the summer. In 1882 the family business went bankrupt and the building and the garden full of fruit trees came into the hands of a certain Mr. Coninck, who immediately gave it its name. Forty years later, the pavilion changed hands again. Anna Van Raemdonck produced ointments and jams there. Her pimple cream was particularly renowned in the area, although Anna made it no secret that the substance consisted mainly of cat fat. During the 1960s, Anna was forced to quit her quackery after a lawsuit.
No extra information.

The tide mill in Rupelmonde has a rich history. As early as the sixteenth century, ebb and flow drove a the large water wheel. The four heavy millstones ground wheat, rye and tree bark. In the Middle Ages, the tidal mill was of great economic importance, as was the Scheldt itself. The ship's toll that was collected greatly increased Rupelmonde's city treasury. The mill has since been restored and classified as a protected monument. Plus, it still works, which makes a visit worthwhile.
No extra information.
Accessibility & HRC

Horeca starting point.
There are several catering establishments in Rupelmonde.

Send hiking brochure to your mailbox.