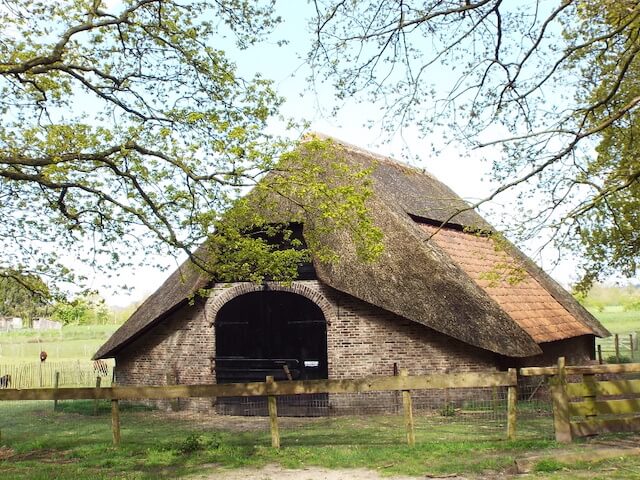 During the trip you will pass some characteristic tobacco barns. In the seventeenth century there was a flourishing tobacco growing in this region. The tobacco leaves were picked in July and August. The tobacco man (tobacco grower), after which this route is named, threaded the leaves on a stick and hung them in such barns to let them dry. The other sights are Amerongen castle, 't Wissel flour mill, a burial mound and the Zuylenstein estate with sheepfold and country house.

96% of this walk is unpaved

The Amerongse Bovenpolder is closed during the period from 1 October to 1 April, during this period you can follow the alternative route as described in the PDF route description.

The windmill from 1855 was operating at wind power until 1930. Then an electric mill took over from the wind. Restorations in 1960 and 1980-1981 could not prevent the mill from falling into disrepair. The mill was thoroughly restored by Utrechts Landschap in 2005. The windage of the mill was also improved by the roof of a wooden wall. In 2009 the brickwork of the mill was repaired. From the mill site you have a wide view over the floodplains of the Nederrijn and Amerongen Castle, which lies almost two kilometers away in the floodplain. The striking name of the mill may recall a substitute for the tram line between Zeist and Arnhem, which ran here between 1884 and 1949.
Utrechts Landschap.
Website: www.utrechtslandschap.nl

Two landmarks meet between Amerongen and Rhenen: the Utrechtse Heuvelrug and the Nederrijn. A greater contrast is hardly conceivable. The ridge has been high and dry for centuries. The river, on the other hand, is constantly moving, wet and unpredictable. The Tabaksschuur Amerongen information center is on the transition from high to low.
Utrechts Landschap.
Website: www.utrechtslandschap.nl

The Zuylestein estate, dating from the Middle Ages, lies on the border between Leersum and Amerongen, south of the Rijksstraatweg. The situation is therefore on the transition from the Utrechtse Heuvelrug to the lower Kromme Rijn area.
Landgoed Zuylestein.
Website: www.landgoed-zuylestein.nl

Amerongen Castle is a beautiful "Huys" from the seventeenth century. The Huys, the garden and inventory form a unit that is rare in the Netherlands. Amerongen Castle has a rich family history of 700 years. The castle is surrounded by historic gardens and lies at the foot of the picturesque village of Amerongen.
Kasteel Amerongen.
Website: www.kasteelamerongen.nl
Accessibility & HRC

Starting point:
3958 CH Amerongen Hof 16 at the Church.
Parking:
You can park on the Margaretha Turnorlaan opposite the gate of Amerongen castle.
Alternative starting point:
A possible alternative is the parking lot at Sportpark De Burgwal on the Brugwal, leaving this parking lot at the back then on the paved road, "Veenseweg" LT starts route description point 2 6th line second part.
Public transport:
Train station Driebergen-Zeist. Bus 50 direction Wageningen. Bus stop Dorp, Amerongen.
Look for more information on www.9292.nl.

Horeca starting point.
There are various cafés and restaurants in Amerongen.