Gorges of the Ardèche 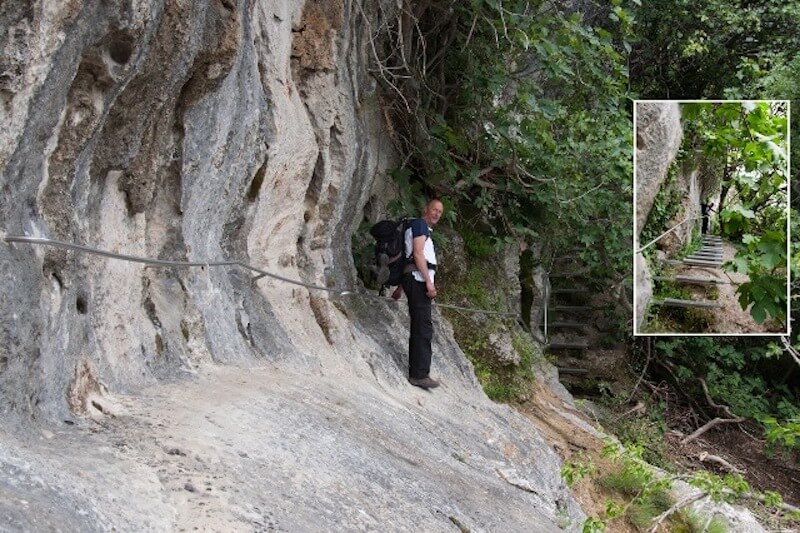 Gorges of the Ardèche

Type: Back and forth

Gorges of the Ardèche.

If you walk here during the high season, thousands of canoeists will accompany you. Out of season, these beautiful Gorges get their authentic character back and then it is pure enjoyment. The Montagne de Sable in the meander below the Saleyron cliffs is formed by flooding. At the height of the Pointe des Cinq Fenêtres it is dozens of meters high. After this beautiful natural phenomenon you come to the Gué du Charmassonnet, here you have to cross the river. Put on water-resistant shoes or Teva's here because crossing the river on bare feet is not recommended. On the other side you follow the river and at the end you come across some ladders and secured passages. These are not dangerous passages but you have to be a little bit sporty.

Take a pair of water-resistant shoes along for the Ardèche crossing.

There are some secured passages at the end of this walk.

Check the water levels because at high water this walk can not be done!

The Gorges de l'Ardèche is one of the most famous sights of the region. The gap of about 30 km long, which is also called the Grand Canyon of France, runs from Vallon-Pont-d'Arc to Saint-Martin-d'Ardèche and winds gracefully through the landscape. The valley of the gorge consists for a large part of impressive limestone rock formations of dozens of meters high. The gorges of the Ardeche have arisen because of the erosion of limestone mountains. Million years ago, the area was under water several times, causing calcium to deposit on the rocky ground. Due to shifts of the earth, glaciers and rainwater, the gorges have been further worn out, resulting in beautiful images.
Nature reserve Gorges de l'Ardèche
07700 Saint-Remèze Le village
Website: www.gorgesdelardeche.fr.
Accessibility & HRC

Startpoint:
07150 Vallon-Pont-d'Arc on the D290 at the Pont de Tiourre.
Parking:
Two kilometers past Le Pont d'Arc the road takes a sharp turn to the left. The starting point is indicated in that bend on the right. Parking either directly opposite the departure point on a vacant lot or 200 meters before the bridge on the roadside.
Public transport:
No information available.

HRC on the route.

Sleeping in the Ardèche.