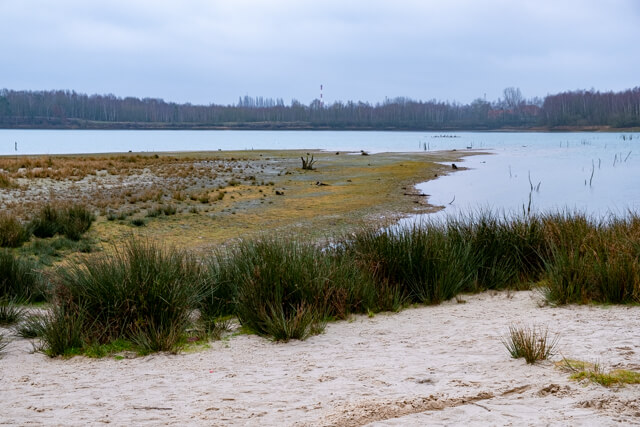 The walk goes from Merksplas Kolonie to a beautiful piece of nature at the Bies fen. Through an open landscape and past old clay pits you make the connection with the nature reserve De Blakheide. Here you walk along Het Blak, which also has a bird watching wall. The walk goes back through forests along small heaths and fens in the direction of Merksplas Kolonie where you follow the ring canal for a while.

You leave the Chapel of Our Lady of the Ascension and go next to the penal institution in the direction of the botanical garden. Here you cross the Steenweg on Rijkevorsel and via a wide lane you reach the edge of the Biesven. The Biesven was dug for the drainage of this low-lying area and is now a beautiful biotope for water birds. Through mixed forest and a more open landscape you walk past several old clay pits that are unfortunately for the most part hidden from view. Via the Ossenweg you make the connection with the De Blakheide nature reserve, you go via a beautiful path along Het Blak where you pass a bird watching wall. The Blakheide is a narrow strip of nature with forests, fens, old peat pits and small moors. You cross the Steenweg at Rijkevorsel again and you come back to the area of Merksplas Kolonie. Here you follow a part of the old ring moat that was dug around the former vagrant colony in 1893 to prevent escapes. Here you can choose to walk on top of the dam next to the canal or on the wider road next to the dam. You will pass the John Harper Monument. On September 29, 1944, the Battle of Merksplas took place with an attack by the Allies (English, Canadian and Polish troops) on the positions of the Germans, dug in behind the ring wall. More than 70 soldiers died here and many were wounded. J.W. Harper single-handedly forced the breach of the ring wall but paid for it with his life. He was posthumously awarded the prestigious Victoria Cross (VC), a tribute to his regiment, the Polar Bears. In honor of this, a monument was erected at the quarantine stable. You walk along a wide avenue through the former colony of beneficence. At the beginning of the 19th century, the government established a charity colony in this domain. Poor people from the cities got a farm here and a few hectares of land. Shortly after Belgium's independence, this idea was abandoned. The current structure still refers to this past. Merksplas Colony later became a vagrants colony where vagrants and beggars could go until the state abolished the vagrancy law in 1993. Poor families who lived here and maintained the domain had to find shelter elsewhere. The last part you walk along the Grote Hoeve where the vagrants were put to work. Here the old horse, cow and pig stables and its imposing hay shed stand out. At the back there are a whole row of open sheds, as well as the so-called 'patato cellars'. The only guardhouse, once occupied by soldiers, still stands in the courtyard.

In 1818 and 1825, 7 Colonies of Benevolence were founded in the United Netherlands to combat poverty. Merksplas-Kolonie was the seventh and last in the list. Vagrants were required to work in the fields to further their work ethic and help them on the right path. This strong form of social control was reflected in the landscape. Dreven, vegetation and stately buildings were given a strict hierarchical order. Open and closed landscapes alternated. The monumental vagrant chapel and Grote Hoeve, a farm complex with various buildings and open barns, were designed at the end of the 19th century by architect Victor Besm.
Kempens Landschap
2580 Putte Peredreef 5
Website: Kempens Landschap
Accessibility & HRC