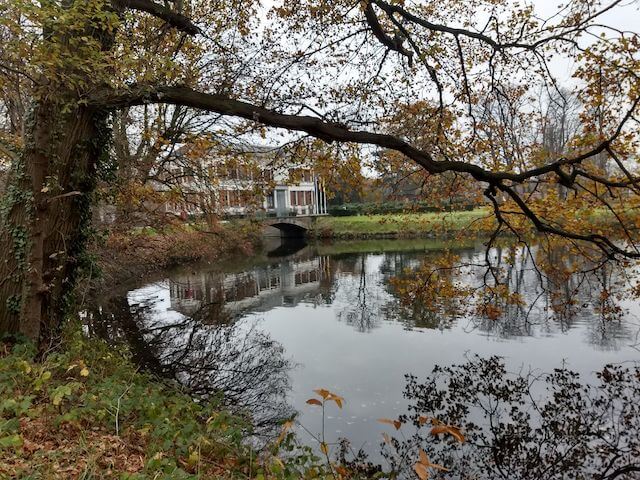 A walk through the park cemetery Schoonselhof and around fort VII. The Schoonselhof is often referred to as Antwerp's Père-Lachaise because of its historic funerary monuments and graves of famous people.

The walk leaves through the park part of the Schoonselhof and passes the castle. Once you are outside the cemetery, you can walk back and forth to the last wooden house of its kind. In the period before the First World War, wooden houses were serviced houses. These types of houses were within the firing range of a fort or redoubt and therefore had to be built of wood. In this way the house could be demolished quickly in case of imminent danger. Via the main entrance of Fort VII you go along the fort moat to the Moerelei. Here you come back through a small gate into the Schoonselhof. You will go back to the starting point through various burial sites with historical graves and military parks of honor.

In the early Middle Ages there was a fortified farm with a double moat on this site. The oldest written record dates from the fourteenth century. Gaspar Ducci had a large farm built next to the castle from which the land was worked. De Neerhoeve still exists and several buildings are still original sixteenth century. Jules Moretus (Mayor) was the last owner of the castle before the city bought it in 1911.
No extra information.

Fort 7 is part of the Brialmont Belt. During the Second World War, the fort served as an ammunition depot for the German Luftwaffe. The ammunition was dropped into the moat at the end of WWII instead of blowing it up, thus a disaster was avoided. On the walk we also pass the memorial monument. A second disaster was avoided in the 1960s when the terrorist organization SABOS operated from here. She was defeated by TWENG under Captain Zeppos. Fort 7 has been recognized as a nature reserve since 1985 and is only accessible during the guided walks of Natuurpunt.
Natuurpunt Zuidrand
Website: Natuurpunt Zuidrand
Accessibility & HRC