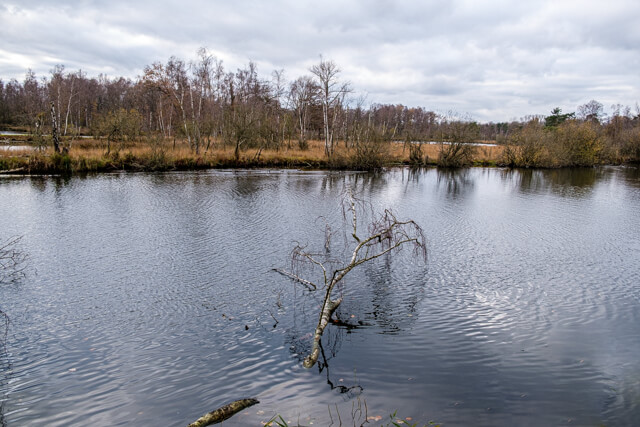 We leave the parking lot in the direction of Sas 3 and see the Kempen canal for the first time. This canal was created in 1846 and literally divided this former heathland in two. The calcareous water of this canal was used to irrigate the heathland, the so-called waterings, which served as meadows and later as poplar plantations. There was also lignite mining, which resulted in the locally known 'sprietkoten'. Shortly after World War II, this area was a chaotic lunar landscape. Everything was turned upside down and emptied out. Fortunately, nature has taken care of this mess of mankind and gradually this heavily hilly terrain has become beautiful and very varied. We walk through a beautiful forest to the 7 delights, a former border. This is followed by a piece through a more open landscape and then again through a piece of forest to the canal. We cross the canal and arrive at the Blauwe Kei (Blue Bolder). From here we walk into the nature reserve De Maat and immediately notice a large pond where silver sand used to be extracted as a raw material for the glass industry. A little further on, an old high-voltage cabin has become an adjoining place for Barn Owls. The route then follows the Kempen Canal for a while and then plunges back into the forest. We return to the starting point along Wateringen. To reach this we first have to cross the Bailey Bridge. The original bridge was blown up at the beginning of WWII. In liberating our country, the English replaced it with a military bridge designed by D.C. Bailey, the Bailey Bridge, which still proves its rock-solidity every day. At walking node 41 there is also the Monument in memory of the victims of the plane crash Lancaster III ND715 'PH-R' on April 23, 1944. They all lost their lives in the crash.

Blauwe Kei (Blue Boulder) takes its name from a large blue slate that is said to have been transported through the Meuse during the ice ages, when boulders from the south were carried away by a mighty flow of meltwater from glaciers. This stone served as a boundary stone between Mol and Postel (so not exactly where Blauwe Kei is now) and would have ended up under sprayed sand during widening works of the canal in 1926. The Geographic Service of Belgium has tried unsuccessfully to find this stone.
Geen extra informatie.
Accessibility & HRC