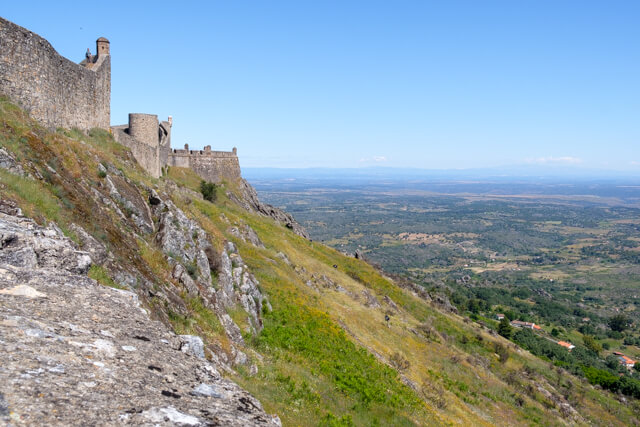 This walk is ideal to visit Marvão in a different way than by car. You start in Portagem next to the Sever river. You leave the village and start a steep climb along an old medieval paved road through a forest of cork oaks. You arrive at the top of the monastery of Our Lady of the Star (Convento de Nossa Senhora da Estrela). Nearby you walk through the Marvão entrance gate. Through the small alleys you reach the castle that is definitely worth a visit. Afterwards you leave Marvão and walk further in the direction of Abegoa via another old medieval road, flanked by granite walls covered with ivy and lichen. Afterwards you connect back to the route of the way there.

Dog allowed on a leach

To Santa Maria de Marvão as in the Middle Ages.

From the parking you cross the bridge and walk alongside the Sever. Soon you will arrive at the Portagem river swimming pool in a park-like setting with large poplars. You follow the bank further and you come to the granite bridge. Due to the archaeological finds in the immediate vicinity and the proximity of the Roman city of Ammaia, the construction of this bridge is attributed to the Romans. You walk further along the bank of Sever and cross it via a metal bridge. After you cross the road, the climb starts via a medieval paved road. After an hour of climbing you will arrive at the top of the monastery of Our Lady of the Star (Convento de Nossa Senhora da Estrela). You can now take the gateway on the left to visit Marvão or follow the road a little further and immediately follow the hiking route again. However, strolling through the streets of Marvão is a must. At the end of the village is the huge castle with its fortress walls. A visit to the castle is certainly worth it. Climbing the high flag tower gives you a spectacular view. The underground citerne of 4§ meters long and 10 meters high is also impressive. After the visit you can leave the village along the other entrance gate and walk back to just before the monastery. Here the descent begins in the direction of Abegoa. You walk around a granite rock formation and walk back via another medieval road and an unpaved road in the direction of the path of the way there.

Good marking. The markers are always present but sometimes you have to take a moment to discover them.

Take enough drinking water with you, especially when it is very hot.

Between Castelo de Vide and Portalegre, a few kilometers from the Spanish border, we find the quiet village of Marvão, located on the highest point of the Serra de São Mamede. The village known as Monte de Ammaia (Ammaia mountain), owes its current name to the fact that in the 9th century it served as a shelter for Ibn Marúan, a Moorish warlord. The Arab domination, which lasted for several centuries, was ended when a military action by the Reconquista won a victory here, under the leadership of D. Afonso Henriques, the first king of Portugal. Geographically, Marvão is a natural strategic defense point, with very steep slopes to the north, south and west. To the east, where the village originated, it can only be reached on foot. This fact did not go unnoticed by the conquerors and kings who were always busy strengthening the castle and the walls. It played an important role in major military conflicts, of which we can still remember the battle between King D. Dinis and his brother D. Afonso (1299) and also the crisis of the royal family in 1383-1385, the wars of independence (1640-68 ), the Spanish succession war (1704-12) or the wars of the peninsula (1807-11).
Turismo de Portugal
1050-124 Lisboa Rua Ivone Silva, Lote 6.
Website: www.visitportugal.com
Email: .

The bridge of granite in Portagem is attributed to the Romans by archaeological finds in the immediate vicinity and the proximity of the Roman city of Ammaia. It is also an important bridge for the history of Portugal and Spain. When the Jews were persecuted in Spain in 1492 as a result of a royal decree of the then ruling Spanish kings, this was the only transition between the two countries. Tens of thousands of Jews fled over this bridge to escape the persecution in Spain. Later the same bridge from Roman times again served to flee to Spain when the persecution of the Jews was started in Portugal.
No extra informatiob.
Accessibility & HRC

HRC starting point.
At the river pool is a nice cafe with terrace under the poplars.

HRC on the way.
There are a few cafes and restaurants in Marvão.